The Dissociative States of America 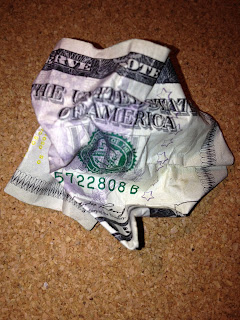 I’ve been wondering about money lately. It’s been said to be the root of all evil, but that’s been so often repeated that even if it’s true, it doesn’t help much. Yet, money does seem to have a perverse effect on people and societies unless its influence is actively kept in check. For some time, my question has been, what’s the mechanism? Why is this so?

The answer, or at least part of it, turned out to be surprisingly simple. It came to me the night I was dismissed from jury duty a few months back. The case I would have heard, had I been seated on that jury, involved money.


I pondered why so much organizational energy would be expended on such a thing when there are potatoes to dig and clothing to sew. Money is, after all, a secondary value. It has no intrinsic worth. So what is really at issue in a crime involving money?

My conclusion is that the criminality of theft consists in that the thief values my money or possessions over our relationship, and our relationship in that moment is the local node of a more universal human connection. Break the bond of trust and the whole fabric is compromised.

The thief, the embezzler, and the perpetrator of fraud present an inversion of values. This inversion is the metaphysical underpinning of the crime. It is also an important determiner of whether or not a crime has been committed. In the case of stealing money, it is not a crime because money is so valuable, as is commonly believed within a culture that has made an idol of it. The criminality of the theft is that the thief breaks something of primary value in our relationship, trust, in order to elevate something that is inherently of secondary value: mere money. Ultimately even property and things of real value are also secondary to relationships. Where this is not the case, relationships break down.

This distinction – crime as violation of relationship versus crime as violation of property – is of immense significance, for those who would promote the idolization of money and property would have us believe that precisely the opposite is the case: that we have made a crime of theft because money and property are of primary value. Once this misunderstanding takes root, those whose power flows from money can constantly enlarge the domain of legalized criminal behavior – behavior that elevates money, a thing of secondary value, over relationships of intrinsic worth. Corporations creating and introducing chemicals and organisms with demonstrably hazardous effects on life, for-profit prisons that successfully lobby for laws that ensure a steady stream of prisoners, banks selling worthless securities to credulous pensions and would-be retirees … there are relationships being compromised by all of these activities, but the activities are profitable, so they go on.

People think it’s all about the money, and these kinds of activities seem to support that idea. But it never really is. It can’t be. Money is nothing. Its meaning is entirely dependent on the contiguity and integrity of the social fabric. This is the reason that money crimes, from embezzlement to fraud to robbery, are real crimes: they are attacks on the social fabric upon whose integrity the value of money ultimately depends. However, for this same reason, money and property are secondary to the primary injury of a “property crime.” This cannot be emphasized enough: the thief becomes a criminal not so much by taking things of value, but by breaking something of infinitely more value in people’s trust. This is why “The People of the State” have a vested interest in maintaining the trust that underlies social functioning. Distrust can reach a level that society cannot bear, as it exacts a toll on every interaction. Transparency, truth, trust, honesty, labor, and freedom: these are the things that generate wealth in the grand sense of the term.

But the interesting thing is, once enough people think money and property are the primary focus, the relationships involved and things of intrinsic worth fall into a secondary position, and then become obscured. The next link in the chain that follows from this error is that as primary and secondary values are inverted, they dissociate. Navigating by the headlights of monetary gain alone, soon enough, medicine will make people sick and dependent, chemicals will be introduced into foods for the convenience of their manufacturers as opposed to the well being of those who eat it, and livestock will live in perpetual misery and stress because more money can be made when their misery is discounted. Criminality can expand virtually unnoticed in such a society and subordinate the law to its own ends. Lacking the discipline of real relationships and intrinsic worth, false relationships rule, and it isn’t long before the mass of society is living in the throes of an amnesic, dissociative fugue.

On the other side of my tax dollars I find torture, predator drones, war crimes and crimes against humanity. On the other side of the dollars I spend on gasoline is an industry that leverages tax subsidies with political donations, despoils the environment, and hires scientists willing to lie about climate change. There’s a banana peel beside my computer – and on the other side of that purchase, often enough, are agricultural practices that abuse land and labor, as well as gross social inequality. And finally, this miraculous device on which I type these words is made by what might as well be called slave labor, except that slaves, being owned, are treated as assets, while manufacturing workers in many overseas markets are treated as expendable.

Contemplating these realities, I can try to extricate myself from the web of moral failure connected with nearly everything I do with my money, or I can join the amnesia, allowing money to dissociate my experience from the realities on the other side of my monetary transactions.

Assuming I choose to regain consciousness, it is essential to wake up from the mass hallucination of money as a primary value. I can think of no better illustration of the nexus of this confusion of primary and secondary values than the television game shows I watched as a child. Many of these had a quiz format where the participants' production of scripted, called-for information or other performance is instantly rewarded with specific sums of money, the tally of which appears somewhere on the screen. So what is important here? Where is the value? Is it in the information, the task, the performance, the skill, the intelligence? No, it’s pretty clear that there’s no meaning to the maze but the cheese, and the cheese is the money. Drill that into people – it isn’t hard in a social construct where hunger follows from pennilessness – and soon money becomes a value unto itself rather than a marker of value. It becomes primary. Once these values have been inverted, it’s almost automatic that money will further dissociate them, altering our perceptions. We don’t see the hungry person, we see the poor person—and the response is very different. Again: first primary and secondary values are inverted, and then they split. This is highly consequential.

Because, regardless of how stuck a culture is on it, money is not primary. This is simply an error, albeit one that can remain undetected among many for longish periods of time under the right cultural conditions. Of course, the effects of the dissociative psychology of money are everywhere to be seen, for its deep genealogy of dissociation is revealed in the social fragmentation, broken people, and broken world it invariably engenders unless it is held in check.

If money holds its inverted place as a primary value long enough, eventually we reach a position where, for example, supposedly sane, reasonable people in the nation’s highest court can assert that money is speech and that corporations are people. Yes, and I can say that donkeys are daffodils, but that doesn’t make it so; I guess that's because I’m not sitting in a special chair in a black robe. It’s as though they would do anything rather than admit the original error of putting money in the place of primary value. So much was built upon it subsequently, and the constituencies of this error became so large and powerful, that any verbal devices that are needed to prop up the false front can and will be used, regardless of how internally twisted, weak, and just plain false they may be.

However, a child could spot the absurdity of such propositions, even if a presidential candidate cannot. Not only does the emperor have no clothes, it is abundantly clear, if we are reduced to talking in this way, that neither has the empire a fitting social fabric. The pernicious influence of inverted and dissociated values ultimately shows up as socially sanctified madness, and in the blindness of that insanity, criminality insinuates itself into everything from the highest institutions of governance down to everyday acts like fueling a vehicle or buying a piece of fruit.

Am I saying that we should do away with money altogether? No. However, I am suggesting that we do away with the thinking that puts money in a place of primary value, which inevitably leads us to a place where we confuse profit making with value creation and monetary wealth with personal worthiness. Granted, those who have used money to cudgel their fellow citizens down will not willingly concede that privilege. But the reality is, both individuals and nations who use money in this way are relying on the dissociative power of money and the hallucinated world it creates to hide their actions from view. The deeper truth here is that we are all collaborators to one degree or another in these crimes, but this doesn’t mean the bosses of the rackets shouldn’t go to jail.