Zombie Cannibalism: Why We Should Be Concerned if there’s a Business Case for Eating People 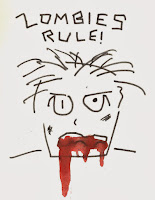 I ate a few of bites of a particularly bad cut of meat last night for dinner before I had to throw the rest of it out, I’m sorry to say. I don’t know what made it taste so bad, but as I was lying awake waiting for an expected case of food poisoning, I started to wonder how to describe my abortive birthday dinner, and the best and most memorable description I came upon was: “It tasted like something out of Jeffrey Dahmer’s freezer.”

Then, it being 2am and the infinite darkness of the ceiling being something of a mirror for my mental processes at the time, I moved on to other considerations. There was way too much of that meat on sale for it all to have come from a single crazed serial killer’s Frigidaire. That left only one possibility: it had to be the product of a global mafia of crazed zombie serial killers.

What if, I speculated as my stomach churned, the on-the-bone lamb that had been labeled for purchase as originating at a ranch somewhere actually originated, say, in China? And what if it were not lamb at all, but the natural byproduct of policy of a large Chinese factory complex – perhaps a policy called, without any special attempt at irony, the Merciful Justice Program – in which slow-moving or fatigued Chinese factory workers are disciplined by having their limbs cut off and marketed to US consumers?

This certainly seemed plausible, though admittedly my thought processes may have been affected somewhat by what I’d eaten and the lateness of the hour. Still, I reasoned, disciplinary amputations have a long history in China, and would have the effect of encouraging the slowpokes to work harder and faster with their remaining limbs. They would also serve as an effective warning to others who might want to take a break. Plus, there would be a marketable product: the severed limbs themselves.

Ok, maybe describing severed human limbs as a ‘marketable product’ goes a little too far. What I’m talking about here is a product that, with a little advertising spin, some creative labeling, and considerable effort to hide the truth about where it came from and what it really is, can be sold to unwitting consumers at a profit. Oh, wait a second…I guess that’s exactly what a ‘marketable product’ is these days. Never mind.

It’s important to note that from a zombie managerial perspective, gaining such a product in this way seems only fair. These workers, in their failure to labor at the prescribed rate of speed for the prescribed number of hours, had limited the productivity of the factory. It only makes sense, really, that their reduced output be compensated for in this way. And if such workers still don’t get the message and up the pace of their work, well then, logic says we should simply cut up the rest of their bodies for the market and replace them with new workers. I mean, for heaven's sakes, isn't that why managers like maintaining a large pool of unemployed people?

Of course, none of this really happens—that I know of. But still, it’s unnerving to think: there’s a business case for eating people.

It’s so simple it’s brilliant, really: People are farmed animals that will run straight into the slaughterhouse, and not only that, they will work to get there. The beauty of it is that a savvy manager can take advantage of human reproductive capacity and natural tendency to grow and gain skills by setting up a system in which they will of their own accord present themselves to be gathered up. And the whole thing is pure profit, my friends, pure profit! Business doesn’t get much better than this, does it? Oh, and don’t forget the organ meat! High markup if handled correctly after slaughter.

Now, I’ve gone over this and over this in my mind, and I’m convinced that we’ve reached a stage in the senescence of industrial society where if a business case can be made for a practice, even a heinous, criminal, and unthinkable one, whether it’s happening right now or not, sooner or later, it will. Mad cow disease, which spread due to the forced cannibalism of cattle fed the meat byproducts of their own species, can be seen as a template for how the current system operates. Zombie cannibalism is the new economy. Welcome to the global slaughterhouse.

For example, I’m trying to imagine the thinking that went into the decision to exempt or at least skirt the intent of the Clean Air, Clean Water and Clean Drinking Water Acts here in the United States in natural gas and petroleum fracking operations.[i] The reason this had to be done is that, like slaughtering people and marketing human flesh, the pollution that fracking generates would have been illegal if the changes had not been made. So, essentially, we’ve decided for convenience’ sake that an activity that we’d previously prohibited is now ok. Just like that. But why, then, was it ever made illegal in the first place? Forgive me, but wasn’t it because it was known that these chemicals, when they get into the air and water, cause people to get sick and die? So I guess that’s okay now, too. Yes, it’s a slow and geographically selective slaughter, but it’s a slaughter nonetheless. Most importantly, however, it generates a marketable product that can be sold at a profit -- or at least in this case a marketable business model that can drill investors.

I’ve read about how in West Africa’s cacao growing regions, children are forced into labor at picking the cacao pods. Frequently trafficked as slave labor across international boundaries,[ii] children may have to climb trees with machetes and walk around in shorts and barefooted, carrying blowers that fog insecticide and fungicide.[iii] My basic question is, when I put that chocolate into my mouth, is that a sweetened form of cannibalism? And if I heat my home with fuel that has been purchased at the cost of fracking area residents drinking industrial waste from their home water wells, is that possibly also a kind of cannibalism, warmed up for sale? Do their tears and blood have to fall in my soup for me to consider myself a zombie cannibal, or is it enough to know that my body’s warmth this winter was paid for by their bodies’ suffering, disease, and premature death? Or to take another example, if I aspire to grisly zombie mayhem, do I have to go to India and hack a poor cotton farmer to death myself, or is it sufficient to go to the nearest mall and buy a pair of jeans made from the GMO cotton that bankrupted that farmer and led to his suicide? I have to ask because, after all, the mall is a heckuva lot more conveniently located, and these jeans look great on zombie cannibals like me.

However, there seems to be some controversy about that last example, so perhaps it’s best to focus on the hairless heads of childhood leukemia victims fixed atop pikes on the dandelion-free lawns of suburban homeowners and their sponsors at the local chemical company. You haven’t seen them? You should, because such deaths, while not made so public, are statistically inevitable given the widespread use of cosmetic lawn chemicals.[iv] Or the cancers reported from petroleum contamination in Ecuador[v] and elsewhere. Or cancers and birth defects among electronics workers.[vi] I mean, what zombie cannibal doesn’t like creating death and real-life monsters, especially if we can consume the results?

But the beauty of the economic system of zombie cannibalism isn’t just in our miraculous ability to use our dollars to kill and torture people at a distance, in effect consuming their bodies in the attempt to keep our own bodies whole. (And our public images intact as well-dressed motorists with weedless lawns and fancy gizmos.) No, as appealing as that is in a zombie kind of way, the real beauty of the cannibalist system is in its increasingly comprehensive structure, which guarantees universal participation in the carnage and the spread of zombie cannibalism to every corner of the earth and every nook of society.

It’s a two-step process. First, we legalize mayhem like releasing toxic chemicals via fracking, or alternately, in our zombie trance we allow people to start doing ghastly things like factory farming. Okay, that’s step one. But then, the second step is, it’s important to make protesting and organizing to stop these practices illegal – or at least suspect enough to warrant the attentions of law enforcement.[vii] That’s right – see the beauty of it? So if you organize to stop fracking in your neighborhood, or protest outside a bank that funds zombie cannibalist mayhem, or even gather in the vicinity of a government building where your legal representatives are ostensibly making the laws, or a coffee shop, you’re now a suspected “terrorist.”[viii] And if you photograph your local factory farm, depending on jurisdiction, you very well might be a criminal. Do these things and you could end up in jail, and you know what you’ll find at every step of the legal process?

You guessed it -- other zombies! Police, judges, clerks, corrections officials, attorneys and others who together will feed off of your suffering, imprisoned body.

And here’s the thing: They must have more victims. Systems will be built to encourage it. Laws will be crafted to guarantee it.[ix] The need is imperative: Bodies will be stuffed into prisons. And more bodies. And more prisons.  Zombies rule!

So, looked at comprehensively, the system of zombie cannibalism is extremely elegant. Because it’s not just that we’re practically forced to gorge on one another like mad cows, but that if we ever try to raise a hand to stop it, it’ll get chopped off, too.

Happy Halloween, everyone—today and every day. And thank you for your brains.