The Gifts We Are: What to Bring to Personal Epiphanies 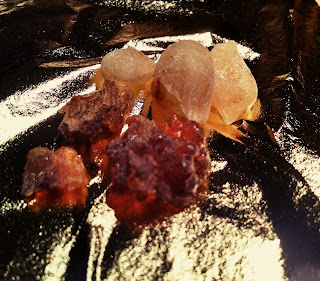 At Christmastime each year here in the United States we will often see nativity scenes, especially in people’s front lawns and in churchyards. They range from simple scenes depicting only Jesus, Mary and Joseph to elaborate dioramas including a full cast of characters. In these larger versions, in addition to the shepherds, angels and animals, we may also see three other figures, often in decidedly more colorful dress, who are intended to represent those called The Three Wise Men, the Magi, or the Three Kings from the East. We are told in the Bible that the Magi navigated by means of a star, got a piece of intelligence from King Herod along the way, and arrived at the scene bearing gifts of gold, frankincense, and myrrh.

Although I’m not much of a churchgoer, I have long been fascinated by the element in the story of the Magi traveling at some risk and expense to see a manifestation of divine light and love, and I’ve wondered about the gifts they deemed appropriate for the occasion.

In some traditions, the arrival of the Magi is celebrated as Epiphany, which comes from a Greek word meaning ‘appearance.’ And the first thing I notice is that we all have our own epiphanies: times when things are illuminated for us and appear in a new light, sometimes even showing up where there had been no light at all. Such moments glow like an inner crèche, and by virtue of the newness and possibility inherent in them, they often seem to gather their own assembly of witnesses, both within us and beyond.

So move a little closer in, angels, shepherds, and magi: this little epiphany is mine. I see in the gifts of the Magi a good indicator, poetically speaking, of the gifts to bear with us as we approach any epiphany, place of emergence, or illuminated way of being in the world.

Let’s start with myrrh and frankincense. In origin, these are the dried sap of trees. Sap is the mobile, fluid element that flows up from the roots clasping the Earth and down from the leaves outstretched to gather light from the nearest star. Moving between these polarities, tree sap draws qualities from both as it runs in its daily circuit between the two. Interrupt this movement by wounding the trees’ bark and the resinous sap emerges. In their primary use, myrrh and frankincense are vaporized in fire—their fragrances are said to raise the vibration and sanctify a space, hence their use in ceremony.

The sap of trees is literally their lifeblood, the active, connecting element that bridges every apparent polarity and in doing so supports the life of the tree in all its dimensions. The ability of a tree to hold the land is funded by its capacity to reach for the sun and air, and the ability of a tree to reach for the sun and air is funded by its ability to hold the land. The sap is the transporter of these energies and resources. Likewise, the unity of the trunk is supported by the multiplicity of roots and branches. The flexibility and the exposure of the leaves is supported by the more rigid and protected quality of the wood, and again vice versa. The dried sap of these trees thus embodies the essence of this active process of living, growing and yes, even being wounded in a world of chance and change.

Likewise, we humans do much the same thing in our growth as we actively span and unify many dimensions and qualities of our existence. Consider: our capacity for thought is affected by whether or not we ate breakfast and what it was, and the development of our high arts and skills grows from our passion and animal ferocity. Our craziest dreams, subtlest reasoning, and most finely attuned feelings are needed by turns to find balance in our awareness amidst the tumult of our experience. We balance within and without, left and right brain, action and contemplation, work and play, sleeping and waking, the changing seasons, and all of the the contingencies and conditions of our lives. And, as we dynamically unify and draw energy from our often rough-and-tumble living and weathering of various kinds of storms, we create a flow with unique qualities within us, just as trees do. We gain character.

To complete the metaphor here, the distilled essence of our lives in the world—what we learn, how we grow, how it shapes us and even how it hurts us—is central to the gifts we bear on the way to our personal epiphanies. Recognizing the value of living amidst all these opposing forces, ups and downs, bumps, bruises, paradoxes and contradictions, is key to carrying our troubles as gifts. Remember that the myrrh tree oozes that sweetness from its wounds, standing out in the sun on the Horn of Africa.

The counterpoint to all the dynamism we see in the production of myrrh and frankincense, of course, is gold. If myrrh and frankincense embody the essence of a present-tense life astraddle numerous polarities, a temporal world of contingency and risk, gold could be said to represent the state in which there never was a polarity to unify: the eternal, the unchanging, the untarnishable spirit. Gold is chemically inert, unaffected, and unchanging. This is why it can sit at the bottom of the sea in the wreckage of a Spanish galleon for 500 years and still have value. As the most malleable metal, pure gold can be hammered into endless changes in outward form, yet inwardly it remains the same.

So consider the contrast here: Gold is a metal forged in the heart of a dying star billions of years ago; myrrh and frankincense, on the other hand, are the dried sap that oozes from cuts in the bark of trees living on the surface of planet earth today. In most uses, gold is endlessly recyclable. Myrrh and frankincense go up in smoke and vanish.

Each of these gifts embodies its own kind of preciousness and energetic signature. We all have a place within us that is golden, unchanging and eternal. Everyone also has that distilled essence of character arrived at by bearing our gold into a world filled with dynamic and ever-changing polarities. Taken together, appreciated and honored each in their own ways, these gifts make for an ideal combination to bring to any epiphany or point of illumination in our lives. In fact, to bear these gifts in full recognition of their value tends to draw us onward toward these epiphanies.

Yet there seems to be a tendency to separate them. It’s strange to consider it, but do we really think the Magi would have been better advised to leave the myrrh and frankincense at home and just bring some extra gold? Would this have improved the gift?  I don’t think so. And neither do we value ourselves rightly if we only consider the quality of soul within us, leaving out our connection to life’s flow and the character we have gained by it, or on the other hand to only offer what we’ve gained by living and not that pure and untarnishable element we brought with us into life.

The Bible story tells us that Joseph was told in a dream to flee into Egypt. Hearing this, the reasoning mind might suggest that maybe the family could have used that extra gold! But that’s not how these stories work. For 2000 years we’ve read about myrrh, frankincense, and gold. The translators found words for these things in other languages and apparently saw nothing in these words to threaten the power structures that employed them. So the inner message stood unchanged.

I’ve often felt that this part of the Bible story was underappreciated, because it says so much about how to approach an illuminated way of being. We absolutely must bring our inner gold with us, our assurance of something eternal, that steady and sure place deep within us that knows our value and our everlasting place in the order of things. By means of this silent, weighty ballast, we right ourselves time and again as the winds of change blow. The security that this kind of gold offers also strengthens our ability to offer it up to these golden moments in the certainty that we will ultimately be enriched instead of diminished by the encounter. However, an equally precious and worthy offering is our unique harvest of living in the world, and the beauty we have wrought from this encounter: our lessons, our scars, our character, our history, and the essential tone, feel and fragrance that belong to our unique lives.

Fundamentally, in any epiphany, we can only offer what we are, and, we are all of this: We are the eternal enriched by the temporal, and we are perfection itself somehow perfecting itself .

In a way, then, since this is what we are, we bring this gift to every life encounter. Further, since we are part of the cosmos becoming aware of itself, our appreciation for all of the gifts we bring catalyzes their reception even when the “recipient” to which we are offering ourselves is a relationship, a place, a moment -- in short, to any personal epiphany or illuminated encounter in the world. If we are to follow the example of the Magi as we navigate toward these epiphanies, we must value our offering: loving ourselves as golden eternal souls who never lost connection with the divine, and in full appreciation for all our quirky eccentricities, our foibles and talents, errors and inspirations, and in both our misbegotten motivations and our nobility in word and deed. Loving ourselves in this comprehensive way primes the universe to receive us in kind, or perhaps it would be better to say that doing so aligns us with the cosmos and its unfolding and magnificent YES! And we can carry these gifts into any illuminated moment, be it a crowded bus, a thought or feeling that comes at the end of a long day, a walk down a forest path leading to a waterfall, or an encounter in a barn in an obscure little Middle Eastern town.

To every moment we make an offering. Aware that we are in an encounter with the divine, we can come as the Magi did: in adoration, and bearing gifts. We then behold and thus participate in the miracle.