Breaking the Trance of “Them” – Ethics for Empowerment

Excuse me, but I really don’t want to hear about “them” anymore. I don’t care about the documentation, the track record, the history, or how well someone makes the case that “they” are the source of the problem.

So if we take discussions of “them” off the table, where does that leave us? What do we do? 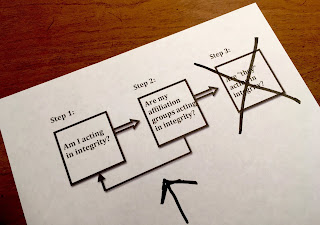 Adding to a conversation, whether through a letter to an elected representative, a meeting at a diner, or even a post on social media, is an action. Voting is an action. Campaigning and protesting are actions. Making purchases or donations are actions.

To be fully empowered in our actions, however, we must ask: Why am I doing this? What are my motivations?  What are the likely outcomes?

Answering such questions is not as easy as it sounds.  Human motivations are complex. For example, am I puffing up my sense of self with feelings of righteous indignation? Am I using ridicule to diminish others? Am I experiencing uncomfortable feelings and looking for a catharsis or a sense of group affiliation to assuage these feelings? When faced with the latest outrage, pain or grief in the news, am I projecting rage, pain and grief from my personal life that I am unwilling to deal with more directly? Am I deliberately trying to arouse a defensive posture in another for my own selfish purposes? And I voting this way because I think it means I'm a good person? If I'm donating, who am I trying to help? What is my real agenda in choosing an affiliation group?  Do I just want to belong, rubbing shoulders with people who agree with my opinions? Do I need to feel “better-than?” Am I itchin’ for a fight?

The uncompromisingly honest digging required to answer these questions is a formidable task, but it’s essential if we are to act with the highest degree of integrity we are capable of at a given moment. Personal empowerment begins here. This is more than enough of a task to occupy a person for a very long time. This time is not wasted because personal empowerment absolutely has to begin with the self.

Step 2: That said, since the laboratory for our introspection is housed in the larger structure of our life experiences, it is also possible and ultimately necessary to extend this depth of scrutiny to our own affiliation groups, which may include one’s faith community, profession, business organization, political party, advocacy groups and ultimately one’s own nation. In other words, we must begin with ourselves in Step 1, and only after establishing ongoing engagement in that step can we expand to those groups that comprise our extended sense of identity through association.

In political discussions, for example, members and leadership of our own parties must face the heaviest scrutiny and be held to the highest standards. This is the most empowering stand one can take, because these are the people we vote for and who rely on us for support. Likewise, it is ultimately the organizations we work for, not some other ones, that we affect most directly. It is ultimately those advocacy groups we donate money to that we can ask tough questions of. And it is ultimately our own government, not the governments of other nations, that we can most immediately call to account.

Step 3? The next logical step, it might seem, would be to begin looking at the behaviors of groups with which we have no affiliation. But a curious thing happens as we move from the ‘I’ and ‘me’ in Step 1 and the ‘we’ and ‘us’ in Step 2 to ‘they’ in Step 3: We lose most of our influence.

Despite this fact, my observation is that political discussions in social and other media typically invert the order of these steps, or perhaps it would be more accurate to say, they start at Step 3 and don’t budge off it. This is dangerously disempowering. Although the perpetual imbroglio of news and social media may serve someone’s interest, I do not feel it serves mine. Most frustrating of all has been how my natural tendency not to move beyond Step 2 if I can avoid it leads to confusion when conversing about anything in a discussion dominated by a Step 3 mindset.

My natural tendency is to hold my own party, my own nation, my own profession to higher standards. These are the things I identify with, these are the groups I belong to, and these are ultimately the things that reflect upon me most closely. When a person I vote for acts without integrity, I take it much more personally than when a person I would never vote for does so. When I see developments in one of my own professions – education – that appear to hurt children, I feel a much greater affront than I would if I were not a longtime teacher myself. And when my own nation acts with callous disregard for life, I take this much more personally than I do similar actions of other nations.

However, introducing this kind of thinking into discussions centered on “they and “them” reliably leads to misunderstandings. When, for example, Democrats talk about the humanitarian catastrophe of Bush 43’s invasion of Iraq, and I bring up the 40,000 estimated dead, waves of refugees and open slave trade that followed in the wake of Obama’s military actions in Libya, or an estimated 600,000 dead in Syria, people will say, “We’re not talking about that! We’re talking about this!” Then quickly, since it appears I have criticized a Democrat, people who identify as Democrats themselves will jump to the conclusion that I must vote Republican.

Well, no, I generally do not vote Republican. And that’s exactly the point: I never voted for George W. Bush. As an American, I picketed (my sign read "War Destroys the Winner") and joined peace vigils in protest against those impending wars, so I did in some sense take that president’s actions personally. However from a purely political perspective, Bush and his party are a “they” to me. Because of this, I took much more personally, was much more disappointed, and indeed felt complicit in President Obama’s atrocities and gross malfeasance. Since I donated to his campaigns, I felt that he killed thousands of people, including children, with my personal backing. And this was in addition letting Wall Street fraudsters off the hook, green-lighting the GMO agrochemical agenda, rolling back civil liberties, expanding drone warfare and the surveillance state, viciously attacking whistleblowers, giving big pharma and the insurance giants free rein over US healthcare, militarizing local police departments with weapons of war, and many other things I hoped he would not do.

But this perspective seems utterly foreign to many. From the perspective of the Step 3 mindset I so frequently encounter, if I criticize a Democrat I must be a Republican. If I shrug off Mueller’s indictments of Russian operatives and instead shine a light on the long train of US-sponsored assassinations, coups d’etat, military invasions, and support of terror organizations rebranded as “moderate rebels” or “freedom fighters,” I must not be a patriotic American. The simple fact of the matter is, as a US citizen, I felt complicit in the latter crimes, which incidentally far exceed in gravity those of Russian Internet trolls. So yes, I take them far more seriously. It’s my job to prevent such things in my affiliation group, even if that “group” is nation of 330 million.

I grew up in the 1960s, when the phrase "America: Love it or leave it" was directed toward those who wanted a government whose actions aligned with their values, Southeast Asia being the focus of the many of the protests and debate at the time. The protesters, in case anyone has forgotten, turned out to be correct: The Vietnam war was a terrible mistake.

Stuck in the trance of "they" and seduced by the relative ease of finger-pointing, one can easily forget that the tiresome chore of holding ourselves and our affiliation groups accountable is the only path toward personal authority and real power. This has practical consequences. When members of a political party or profession look the other way at the misdeeds of their fellow partisans or professionals, it hurts the profession, and it hurts the party. Perhaps the most devastating result of the personal and collective failures in our moral housekeeping is that our individual and collective lack of integrity leave us open to to external invasion and internal subversion. We become our own enemies. A lack of integrity invites dis-integrity, and ultimately, disintegration.

Conversely, consider what would happen if a US political party rooted out all its own corruption and started honestly serving the people, speaking the truth, and protecting the Constitution. My guess is, it would be unstoppable. Tapping into and motivating nonvoters rather than squabbling over “likely voters” would utterly reshape the political landscape.

From the forgoing, one may start to grasp how the currently fashionable politics of scapegoating is ultimately disempowering. The fundamental thing we need to do to change this dynamic is to focus, individually and through our affiliations and associations, on Steps 1 and 2. That in itself is enough to shift the balance of power. The process starts with inquiries about ‘I’ and then moves on to consider the larger spheres of ‘we.’ When faced with divide-and-conquer tactics, the winning strategy is to build a stronger self and a bigger ‘us.’

Posted by Clifford Dean Scholz at 10:10 AM